the olympics are my jam. i don’t know if its because i was an athlete and the olympics are the ultimate goal or because my affection for Canadiana athletes leave me with feelings of deep respect. 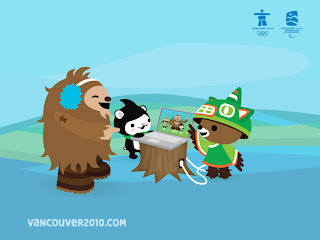 the opening ceremonies were questionable, in the sense that as a Canadian i felt very little connection to the interpretive expressions.  i think they could’ve included a segment on urban lifestyle considering vancouver is the host city. either way, twitter brought tons of comic relief to the opening ceremonies.

it was amazing the feel the energy jump out of the screen and to see the Canadian athletes walk out into the stadium. i was much more emotional than i thought i’d be and that for sure stems from my own olympic aspirations as a teen.

watching moguls last night and seeing alex bilodeau win gold was another overwhelming event. so many tweets acknowledging the feat and reminding us all to remember where we were at that moment. its incredible to see how twitter has influenced our ability to share information and opinions, at such a rapid pace.

i am stoked to keep watching the games, and read up from those tweeting on site and at home. i hope we see some more medals and even more personal bests from our athletes. no matter where they place, it really comes down to knowing you kicked our own ass, as best as you could.

ps – check out this cute window at The Drake Hotel from my girlies at queenandbroadway.

good luck and sending mayjah fist pumps to you in vancouver.

the one where lily and clare step out